If ever there was a case of being in the right place at the wrong time, it existed for Harold Clark DeLong. A Treasurer at the Goudey Gum Company, DeLong left the organization in 1932 when Enos Goudey sold the business, starting his own company just blocks away from the Boston conglomerate. And while DeLong’s ill-fated foray into the baseball card market wouldn’t last longer than a single season, he produced one of the most memorable and coveted collections in baseball card history. 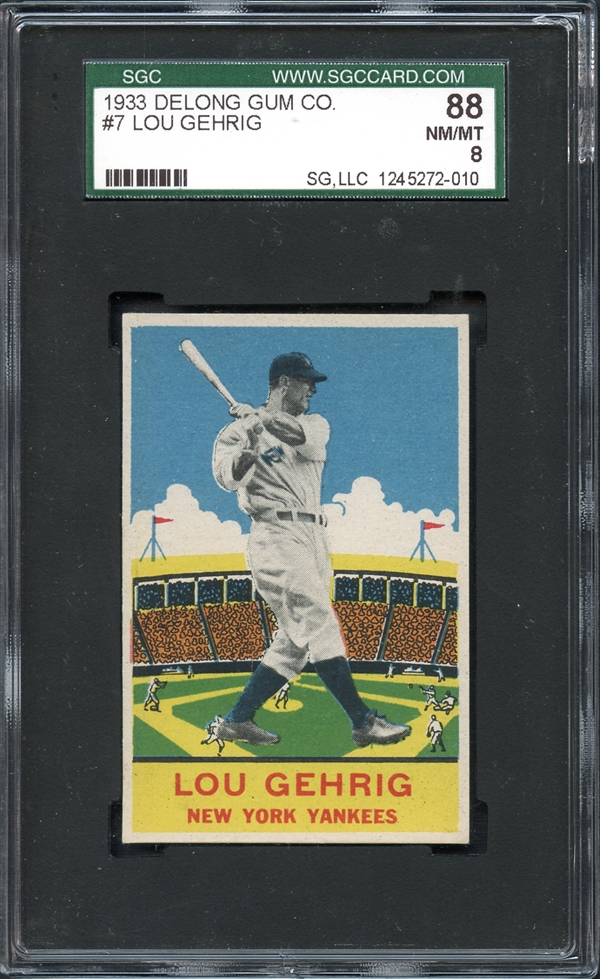 Harold DeLong had an advantage as a key executive in the development of the Goudey series prior to his departure, allowing him to create a clearly more aesthetic product than his former employer, but there were just too many obstacles standing in his way. Goudey, founded in 1919, was a well-established purveyor of chewing gum and had the financial might to secure the materials needed to produce the largest mainstream collection since the legendary T206 series. DeLong, on the other hand, was pioneering a poorly funded start-up that could only muster the ability to release a diminutive 24-card collection. Oh, but what a collection it was! While the brightly colored pigments, real life player depictions and ornate background artistry were a tremendous contrast from the straightforward and often monochrome format of the Goudey collection, there simply was no way that DeLong’s small series could compete with a Goudey set ten times the size that included a quartet of Babe Ruth cards. In addition, the DeLong cards didn’t have the nationwide distribution channel of the Goudey series, and if that wasn’t enough of a handicap, it was widely thought that Goudey’s bubble gum was just clearly superior. Even in the hometown Boston area, DeLong had to contend not only with Goudey but also had to compete with the regionally issued George C. Miller collection. All things considered, DeLong never really stood a chance of success. 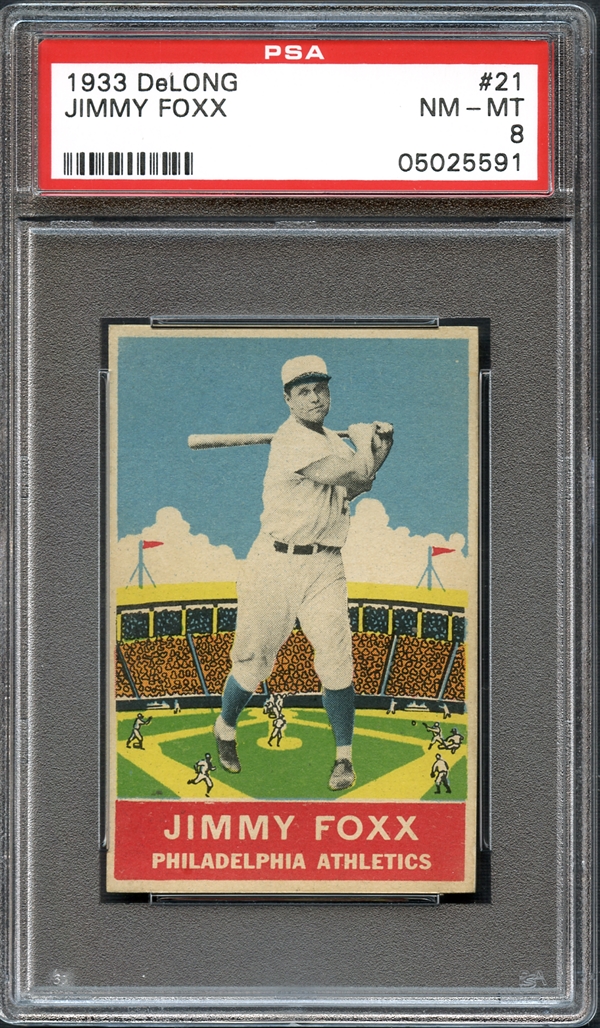 Although there is no Babe Ruth card in the DeLong set, the 24-card collection is jam-packed with star power, boasting 15 Hall of Famers and led by the issues of Yankees Hall of Famer Lou Gehrig and fellow Cooperstown resident Jimmie Foxx. In addition to their groundbreaking appearance, what makes the DeLong series so highly collectible to advanced hobbyists is the difficulty to build an elite assemblage. Nearly 3,000 cards from the entire 24-card collection have passed through the halls of PSA without a single GEM MINT specimen, only two graded MINT and just five subjects (McManus, Terry, Traynor, Gomez and Klein) making it into double-digits pops at the PSA 8 level. Ironically, some of the most difficult high-grade finds from the series are not Hall of Famers: Oscar Melillo, Riggs Stephenson and Lon Warneke. While the series is a challenge to build, there are presently 31 complete collections on the PSA Set Registry with just eight that have reached a level of 7.0 or higher.

Featured in the Mile High Card Company September Auction is the second finest 1933 DeLong set ever assembled, boasting a set rating of approximately 8.83 with several PSA 8.5 cards that stand as the one and only examples at that grading tier with none graded higher. All but two of the cards in the collection have a grade of NM/MT or better. As MHCC has done in the past with world-ranked assemblages, this collection is being offered as a complete set as well as each card offered individually, with the final sale going to whichever total (the set versus the sum of the individual lots) is higher.

MHCC is presently in the process of lining up more breathtaking items to make our next auction even greater and you still have time to be a part of it. If you desire the maximum possible return for your prized sports cards and/or memorabilia, please call (303) 840-2784, contact us at www.milehighcardco.com. or visit the MHCC booth at #1136 and #1138 of  the 38th National Sports Card Convention in Chicago, July 26th-30th.  You might even walk away with an added bonus – a 1952 Topps Mickey Mantle card PSA AUTHENTIC.

For each $500 of value consigned to the September MHCC auction, you’ll earn one ticket for the drawing. The larger the consignment, the more tickets you’ll receive, but everyone who consigns to MHCC at the National will be entered. The card is valued at $10,000 and the winner does not need to be present for the drawing, which is at 3:00 PM on July 30th.