On August 11, 1929, Babe Ruth sent a Willis Hudlin pitch over the right field wall for his 30th home run of the season. The Yankees lost that game 6-5 but “The Bambino” made history as the charter member of the legendary 500 home run club. Before Ruth, the concept of a 500 home run hitter seemed ludicrous as his predecessor to the throne, Roger Conner, held the top mark for 24 years with 138 dingers. Oh, you could make the argument that those were the “dead-ball” days and the game changed dramatically in the 1920’s (and of course, it did), but consider that the same day Ruth touched all four bases for the 500th time in his career, #2 on the list was 33-year old Rogers Hornsby, who also hit a home run and pushed his career total to 233. It takes a combination of consistent greatness and injury-free longevity to reach the magic number, with the long list of baseball players that came up just short including such icons as Lou Gehrig (493), Stan Musial (475) and Carl Yastrzemski (453).

Welcome to the Club! Ruth has Company

As the home run became a more integral part of the game, players came along with greater power and longevity. Though challenging Ruth’s 714-lifetime homers was still a pipedream, the idea that another superstar could join Ruth at the 500 home run plateau seemed attainable given the right circumstances. When Babe set the single-season record in 1927 by notching 60 round-trippers, a mark that would stand for over 30 years, he single-handedly hit more home runs than every TEAM in the American League. Teammates Gehrig and Lazzeri finished 2nd and 3rd with 47 and 18 respectively. But just five years later, with Ruth’s career winding down, the 30 home-run hitter was no longer an aberration. Eleven years after Ruth started the club, Jimmie Foxx next crossed the barrier and New York’s Mel Ott joined as the first member from the National League five years after that. Where once there was just Ruth now stood three. But it was time to set a few more places at the table, this party was just getting started!

It would be another 15 years before baseball would see another 500 homer guy with Ted Williams gaining admittance in 1960, having lost several years to military service. And while the 1950s didn’t celebrate a 500 home run hitter, it produced a new wave of superstars that made it the golden age of baseball and opened the club to new membership. Mickey Mantle and Willie Mays started their assault on “The Big Apple” in 1951, followed by Eddie Mathews in ‘52, Ernie Banks in ‘53, Harmon Killebrew and Hank Aaron in ‘54, Frank Robinson in ‘56 and Willie McCovey in ‘59. Eight new members that began their careers in the 1950s had all crossed into the club, with Mantle and Mathews doing it two months apart in 1967 and Aaron joining exactly a year after Mathews. Adding in Reggie Jackson, Mike Schmidt and Eddie Murray, the 500 home run club was up to 15 members, all of which are enshrined in the Baseball Hall of Fame. Since 1999, 12 more members have entered the 500 home run club since; McGwire,Palmeiro, Bonds, Sheffield, Sosa, Griffey, F. Thomas, Thome, M. Ramirez, A. Rodriguez, Ortiz and Pujols.

MHCC Offering Collection of Game-Used Bats from Each Member of the 500 Home Run Club and More!

Growing up on Long Island, my first recollection of baseball was in 1973, when my 3rd grade principal allowed the radio broadcast of the National League championship series to be played over the intercom for the last 20 minutes of the school day. I became a Mets fan. And it was exciting, because the Mets were really good, and they had Willie Mays! Except … he really wasn’t Willie Mays; he was a 42-year old part-time player who batted .221 and used to be Willie Mays. While guys like Mays, the real immortals of their sport, have earned the right to leave the game on their own terms, it’s always a little sad when they seem to hold on just a little too long and become a mere shell of what once was. Even the great Babe Ruth, still one of the best in the game at age 38, was relegated to a being a sideshow for the last place Boston Braves just two years later. When it comes to sports, or all aspects of life for that matter, Father Time remains undefeated. While many know when to hang it up, here are some of the greatest athletes from each sport that are in danger of “Willie Mays-ing” themselves: 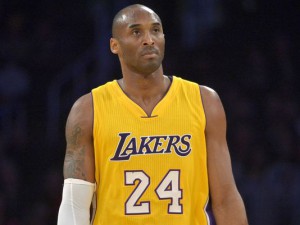 “The Black Mamba” had done it all! He’s won titles with Shaq, he’s won titles without Shaq, captured scoring titles and MVP awards, and appeared in 16 consecutive all-star games. But over the last 3 years, Kobe has learned the names of the people in the training room better than the ones on the court. Finally “healthy” at age 37, the once great Lakers are a joke and Kobe is the punch line. It’s understandable that Kobe didn’t want to go quietly into the night from the assortment of injuries that would afflict anyone who has spent more than half of his life on an NBA court. And Kobe certainly deserves the pomp and circumstance of the “farewell season” afforded the true greats of the game. But simply put, Kobe can’t find the basket anymore. Sure, he still averages 16 points per game, but his 32% shooting percentage (23% on three pointers) couldn’t get him a roster spot in the D-League these days. Yeah, you could say that Kobe was the Willie Mays of professional basketball … and still is. 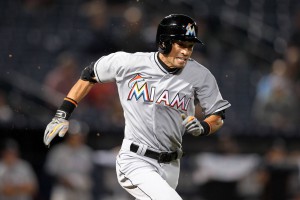 After 9 seasons as one of the greatest hitters in Japanese baseball history, Ichiro came to the U.S. as a 27 year old rookie and did the same thing here. In his first 10 seasons with Seattle, “The Wizard” averaged 105 runs scored, 224 hits and a .331 batting average, all while winning the Gold Glove award every season. But it’s been five years since Ichiro has seen the .300 mark, and at 41 years old, he’s a pinch hitter and 4th outfielder for the Miami Marlins, playing behind such baseball notables as Christian Yelich and Marcel Ozuna. OK, he’s only 65 hits away from the legendary 3000 hit club and no one can blame him for sticking around to get that. But if he matches last year’s .229 mark, he’s gonna need some major at-bats. Hopefully he makes it to 3000, gets one more (because Roberto Clemente should forever stand alone to guard the gate) and hangs it up the next day. 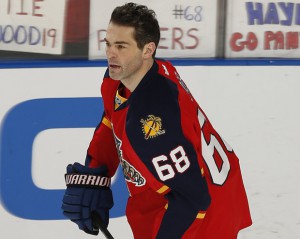 He’s 43 years old and in his 23th NHL season, took a three year hiatus to play in Europe and ranks 4th all-time in goals and points scored. This season, he anchors the Florida Panthers’ top line and has 9 goals and 21 points in 28 games while positioning the Panthers to make a playoff run for only the 2nd time in the last 15 years. Never mind Jaromir, you keep playing!

As residents of the Mile High City, we reserve the right to delay passing judgment on “The Sheriff.” True, he’s 39 years old and has been pretty disappointing this season, but he’s got injuries to his foot, shoulder and ribs. And let’s not forget those four surgeries on his neck; who knows how much of a factor that plays into an aging quarterback’s performance. But Manning threw for 39 touchdowns last season and found the end zone 131 times over the last three. Can it really be over that quickly? It was for Johnny Unitas, Joe Namath too, but they stuck around (in name only) for several more seasons. A “healthy” Peyton deserves one more shot to find out if the tank had a hole that’s been patched or if it’s just empty, though it might not happen in Denver. John Elway, a Hall of Famer who walked away from the game on the heels of two consecutive Super Bowl championships, isn’t sentimental. Like Elway says, “Plan B? There is no Plan B. We’re going with Plan A!” One of the greatest quarterbacks of all time, a sure Hall of Famer, may be just like Willie Mays … but not in a good way!

What do you think?  Anyone else you would add to this list?  Comment below, we’d love to hear your thoughts.