Not long after the New York Yankees secured another seven game World Series championship over the Brooklyn Dodgers in the summer of ’52, Topps architect Sy Berger was hard at work, utilizing feedback gathered from the release of the inaugural Topps set to create an even better product for 1953. The “super-sized” pasteboards were praised by collectors, though the subpar colorization of the black and white images and limited success of the troubled high-number series left plenty of room for improvement. An even bigger problem was brewing in Philadelphia as Topps had the attention of rival Bowman, who would not only increase their card size for the 1953 collection but also file a lawsuit against Topps, alleging player contract violations. It was clear that in 1953, Topps was either going to make their mark or become the next victim to fall by the wayside.

Topps 2.0 – Making a classic even better

In order to improve the appearance of the players, Topps commissioned artist Gerry Dvorak to sketch and paint the likeness of each player. The result was a collection of memorable portraits and action shots, finely detailed with dominating images and warm flesh tones that, to this day, stands among the most admired in the industry. Even the background of each card was carefully crafted, capturing the feel of the stadium crowd and appropriate advertising that lined the fences. Jackie Robinson was moved to the pole position as card #1, with Roy Campanella, Pee Wee Reese, Mickey Mantle and Eddie Mathews also moving from the previous year’s high-number series to the ’53 set’s first series. This gave collectors an opportunity to quickly acquire many of the popular stars that they were unable to find the previous year.

As the court battle with Bowman over player contracts raged on, Topps was forced to continually make changes to their print plans, replacing players that they couldn’t get under contract by either “moving up” a player from the next series to the present one or double-printing a player in the existing series. There were also five cards from both the 1st and 2nd series that were moved back, creating “chase cards” that couldn’t be obtained until the next series was released. By the time Topps reached the late-season high number series, there weren’t enough contracted players for a complete run, so many more cards were double-printed, with six (#253, 261, 267, 268, 271 and 275) left out of the series entirely. Seemingly a mix of superstars and “no-name” players, the cards slated for double-printing were likely chosen randomly or left in the hands of the printer to decide. If left up to Topps, they surely would have gone exclusively with big name stars. After all, who’s going to complain about getting too many Mickey Mantle cards? As for the six missing subjects, one can only speculate who they may have been. But it should be noted that Richie Ashburn, Leo Durocher, Gil Hodges, Bob Lemon, Robin Roberts and Duke Snider all appear in the ’52 series and are absent in the ’53 collection.

With the dreadful centering issues plaguing the 1952 Topps high-number series largely corrected, a new wrinkle was introduced that would soon be added to the card collector’s vernacular; chipping. Though the attractive red and black nameplates that ran along two of the edges were met with overwhelming favorability, collectors soon realized that the colors easily flaked, making it a much more difficult task to keep their cards in pristine condition. As a result, only 30 cards from the entire set have graded PSA 10, and less than 1% of all submissions have reached the level of PSA 9. Ironically, Bowman countered with a “color” series revered by many as their best ever, but they fell to Topps once again in terms of sales, and a new king of the baseball card market was crowned!

Over the last 25 years, several small “finds” of high-grade 1953 Topps cards from Canada produced a modest cache of perfectly centered, chip-free pasteboards that received the blessing of PSA in the form of PSA 8 and higher grades. There’s little doubt that some of those premier examples made it into this complete assemblage. Presented in the October 2015 Mile High Card Company auction is a crowning achievement in card collecting, one of the finest 1953 Topps collections in existence. Nearly impossible to assemble today if started from scratch, this set ranks #4 on the PSA Set Registry with an overall 8.41 set rating. Every card in this collection carries a minimum grade of PSA 8, with #41 Slaughter, 77 Mize, 114 Rizzuto and 63 others graded PSA 8.5, and 54 cards graded PSA 9, including amazing MINT specimens of #27 Campanella, 37 Mathews, 61 Wynn, 66 Minoso, 76 Reese and 86 B. Martin. Included is a stunning PSA 8 example of Mickey Mantle, a card that has been riding the coattails of the 1952 Topps card to record-breaking prices each time one is offered. The most astonishing member of this collection is a breathtaking PSA 9 card of #224 Satchel Paige, one of the single finest specimens known to exist. Offered as a complete set as well as each card individually, with the higher total between the set price versus the sum of the prices of the individual cards determining the method of sale, this set is but one of many collections rating at or near the top of the PSA Set Registry that will be available in the MHCC October 2105 auction. 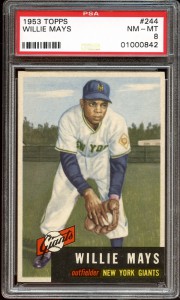 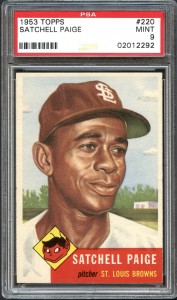 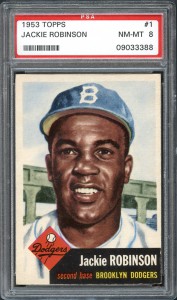 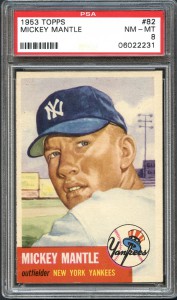