Many times over the past few years and at least twice since the 2019 baseball season started, I’ve heard comparisons of Los Angeles Angels center fielder Mike Trout to New York Yankees Hall of Famer Mickey Mantle. Now I’ve never been a Yankees fan or a Mantle fanatic so I have no compunction to jumping on board the Trout bandwagon, but my first instinct is to scoff at such a notion. Perhaps it’s the baseball card collector in me that sees Mickey Mantle as an untouchable given he’s the single most coveted post-war subject on cardboard and the primary reason for the almost 70 year reign of Topps, but I also realize that his popularity in the hobby is much larger than his actual accomplishments on the field, because as grand as they obviously were, there are plenty of baseball players with a superior body of work overall. OK, so I’m open to the discussion. I don’t really follow Trout all that much other than to know he’s really good, so as I put this blog together, I’m going in with an open mind and a blank slate; no preconceptions. I’ll learn the ins and outs of this comparison as I write it, and I’ll play the advocate and cross-examiner for both parties. At the end of this, I’ll issue a ruling. Here we go: 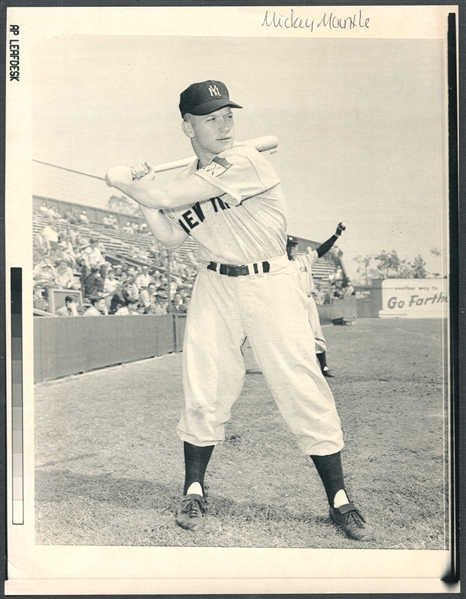 As I said, it’s difficult to entertain a comparison of any modern day ballplayer to Mickey Mantle, and I imagine to the majority of Yankees fans, them’s fightin’ words! He’s so beloved to collectors that anything Mantle related immediately moves to the head of the class. But OK, let’s put that on the back burner and talk accomplishments, and to be fair we’ll toss out the partial stats of his rookie year and stick to the first 7 full seasons of his career, same amount of time Trout has been in the league. While Mantle’s first three seasons were solid, he really didn’t have the breakout year worthy of being named Joe DiMaggio’s heir apparent until 1955, when he led the American league in triples (11), homers (37), walks (113) and slugging percentage (.611). And of course, Mantle has the 1956 Triple Crown season under his belt (52 homers, 130 RBI, .353 batting average and an AL MVP award). I haven’t even looked at Trout’s accomplishments yet but I’m pretty confident he can’t match that. Mantle followed up that season with another AL MVP performance, posting 34 homers and batting .365 while walking a league-leading 146 times for a gaudy .512 on-base percentage, second to Ted Williams in large part due to “Teddy Ballgame’s” .388 batting average (no shame there). In the final year of our seven season comparison, Mantle once again took the home run crown with 42 round-trippers and topped the league with 129 walks while batting .304. In all,, Mantle smacked 234 dingers, batted .319, stole 69 bases, led the league in homers three times, runs scored four times, triples once, RBI once and won an AL batting title and two AL MVP Awards. 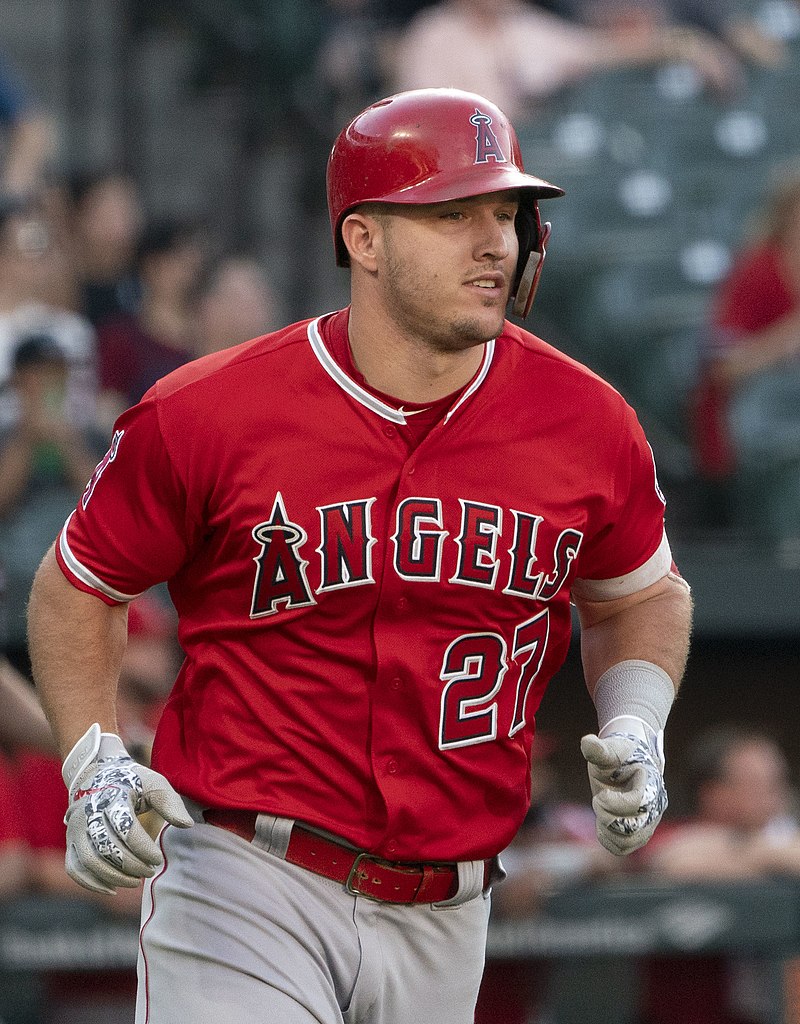 While Mantle was “the next in line after Ruth, Gehrig and DiMaggio” to lead the decades long Yankees dynasty, Mike Trout received no such fanfare.There were 24 players selected ahead of him in the 2009 MLB draft, six of which never spent a second on a big league diamond. Merely being mentioned in the same sentence with Mickey Mantle is already an amazing feat, but let’s be fair and put “The Commerce Comet” on the bench, it’s Trout time! In his first full season with the Angels, Trout won Rookie of the Year honors and finished 2nd in AL MVP voting with 30 homers, a .326 batting average, a league leading 49 stolen bases and 129 runs scored. Following a 27 homer, 33 stolen base and .323 batting average performance the next year that left him runner-up in the voting once again, Trout took the AL MVP crown in 2014 off of 36 homers with a league-leading 111 RBI and 115 runs scored, and a .287 average. He followed that up with a 40+ homer season, mashing 41 taters while batting .299 and leading the league in slugging percentage. Another MVP season in 2016 with 29 homers, 100 RBI, and league leader in walks (116) and runs scored (123) was followed by campaigns of 33 and 39 home runs respectively, thriving above the .300 mark all three seasons (.315, .306 and .312). Trout’s 7-year total: 235 home runs, .310 batting average, stole 185 bases, led the league in runs score four times, RBI once, stolen bases once, walks three times, and won two AL MVP Awards.

After going back and forth on the subject, I have to agree with what Tom told Tessio in The Godfather, “Can’t do it, Sally.” Baseball traditionalists tend to focus on the numbers when making player comparisons, more so than any other sport. Sure, Trout’s career stats are pretty similar to Mantle’s. But there’s one glaring distinction between the two: Mantle had captured four World Series Championships in six appearances during that time, hitting 11 homers in 130 at-bats with at least one in each of the six matchups. Mantle was the heart of a newest generation of the Yankees dynasty, and like great champions, made those around him better. Trout has one playoff appearance, and went 1-12 with a home run in a losing cause. Sure, Trout supporters may object to introducing championships into the comparison. Objection overruled. Part of what makes Mickey Mantle the player that attracts such a comparison is his ability to win. It’s why calling Trout “the new Mickey Mantle” is contentious to so many. If you called Trout the “the next Ken Griffey Jr.” most people wouldn’t bat an eye, and that might actually be the better comparison, both statistically and from a viewpoint of status among the baseball community at the same point of their respective careers. But comparing Trout to Griffey doesn’t carry the same stature as comparing him to Mantle. That’s the point. Not to say that Trout couldn’t someday be a modern day Mickey Mantle; he just hasn’t earned it yet. Few have.

Ruling for the defense, Trout is not the new Mickey Mantle.