As we stand at the cusp of a new baseball season, Mile High Card Company is set to commence with the Spring Auction, which begins on March 2nd and concludes on March 19th. The auction preview will be available Friday, February 27th. Keeping in line with MHCC’s sterling reputation for offering the best in sports cards and memorabilia known to exist, this auction promises to feature many unique, rare and historically significant items. Headlining the auction, one of many items that would serve as the cornerstone to any world-class collection, is an SGC 60 EX 5 graded 1916 M101-4 Sporting News card of Babe Ruth. 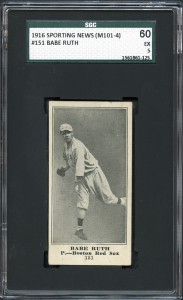 The most important rookie card ever produced!

While the legendary T206 Honus Wagner card and a handful of other illustrious pasteboards may eclipse the Ruth rookie card in both rarity and value, the premier appearance of “The Bambino,” pictured as a lanky Red Sox pitcher, provides an ironic contrast to the rotund slugger who posted unprecedented offensive numbers while wearing the pinstripes of New York just a few years later. Unlike baseball cards that were produced exclusively by tobacco, gum, or candy companies, the Sporting News collection was the creation of Chicago-based printer Felix Mendelsohn, who contracted with several companies to distribute cards with blank backs so his clients could add their own advertising and create a “collectible business card.” Thus, the Ruth rookie card is thought to exist with no less than 16 different reverses though the Sporting News example is the most widely coveted by collectors.

After posting a 22-9 record with a 2.39 ERA for the minor league Baltimore Orioles in 1914, Ruth’s contract was purchased by the Boston Red Sox. From 1915-1917, Ruth was one of the best pitchers in the game with a combined 65-33 record and an astonishing 2.01 ERA, leading the American League at 1.75 in 1916. But Ruth’s prowess as a hitter was becoming more evident, and with his desire for more playing time, the Red Sox began transitioning Ruth to the outfield in 1918, cutting his starts on the mound in half and giving him more opportunities at the plate. Ruth proved that he could be dominant at both by posting a 13-7 record with a 2.22 ERA while also batting .300 and leading the American League in home runs in just 317 at-bats. In 1919, Ruth’s time on the mound was scaled back even more but he still posted a 9-5 record, though his ERA rose sharply to 2.97. More importantly, his 432 at-bats yielded 29 homers, 113 RBI and 103 run scored, all league-leaders.

“The Babe” almost wasn’t a Yankee! When Red Sox owner Harry Frazee made it public that he was willing to part with his greatest asset, the Chicago White Sox offered star outfielder Joe Jackson and $60,000 cash for Ruth’s services. Wary of the ongoing investigation into the 1919 “Black Sox” scandal and the potential consequences to “Shoeless Joe,” Frazee was delighted when the New York Yankees entered the bidding with a cash offer of $100,000 and Babe Ruth was sent to New York. Manager Miller Huggins immediately put an end to George Herman Ruth’s pitching career and made him a full-time outfielder. Had the White Sox been successful, instead of Ruth becoming the savior to restore baseball’s integrity, he would’ve worn the cap of the team that destroyed it and likely become just another name among the greats and taking the sport of baseball on a very different path. 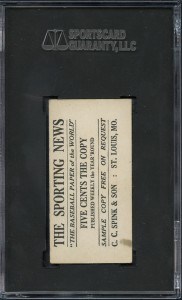 Offered is one of the most stunning, mid-grade M101-4 Sporting News Babe Ruth rookie cards in existence!

The featured item would be at home in a world-class museum or on exhibit at Cooperstown’s Baseball Hall of Fame just as easily as it will be in the collection of the highest bidder. Though graded SGC 60 EX 5, an extraordinary accomplishment on its own, this prolific pasteboard is likely the most impressive specimen for the grade and has a stronger overall appearance then several graded even higher that have recently become available. Any collector that has been in the market for a mid to upper-grade Ruth rookie card is well aware of the two biggest pitfalls plaguing the issue; centering and print lines. The M101-4 Ruth is almost always poorly centered, but the featured specimen offers superior framing for the issue, slightly positioned toward the left side but well within parameters for a higher grade and far more accurate than the large majority of examples in the EX grade. Even more significant is the absence of the two horizontal print lines that appear on virtually every M101-4 Ruth, clearly scarring the surface from the center to the right edge near the top of Ruth’s image and in the middle, by Ruth’s waist. Many prospective buyers think these imperfections to be unavoidable at this grade level, but we’re happy to report that this card proves that to be false. The image quality of the young, lanky legend is superb, enhanced by an unadulterated layer of reflective gloss, while each corner shows consistent, mild wear with light enamel loss that is visible under magnification but looks less pronounced to the naked eye. The Sporting News ad on the reverse is surprisingly strong and well-preserved, ably positioned on an off-white canvas that is clean save for the light mark under the “C. C. Spinks & Son” name, a negligible blemish considering its placement on the card and a likely reason the SGC grade isn’t higher … which, of course, would greatly increase the price. We advise you to research prices realized for this card in similar grade, then look at those cards and compare it to what you’ll be getting here. We did, and there was no comparison; this one is superior … hands down!