For the first time since buying out Bowman in 1956 and taking control of the baseball card market, the Topps Chewing Gum Company found itself struggling to hold off a competitor. After facing a mild challenge from Fleer in the football card market from 1960-1963, the Philadelphia Gum Company entered the fray by securing exclusive rights to the National Football League (NFL), leaving the floundering American Football League (AFL) as Topps’ only alternative. Competing against the likes of Johnny Unitas, Jim Brown, Paul Hornung and Bart Starr, the once invincible Topps Company had ironically become the “Bowman” of the football card market. But Topps would stumble upon a weapon of their own, and Philadelphia Gum would learn a painful lesson that indeed the neon lights are bright …. on Broadway!

A Star is Born

In the first round of the 1965 NFL draft, #12 overall, the St. Louis Cardinals selected University of Alabama quarterback Joe Namath. On the same day, the AFL held their draft with the New York Jets selecting Namath #1 overall. With both teams making a pitch to secure his services, Namath shocked the football world by choosing the New York Jets, signing a contract for a record $437,000 and giving the American Football League its first true superstar. Namath’s magnetic personality and brash confidence were a perfect match for the New York stage and it wasn’t long before Namath was to Manhattan what Mickey Mantle was to the Bronx; a personality bigger than the game he represented. His flowing hair, his cocky attitude, and his aggressive style on the gridiron cast him in the role of antagonist to the NFL’s military crew-cut wearing Unitas. Namath became a symbol of the free-wheeling, offense first approach of the AFL, while Unitas was the face of the methodical, smash-mouth style of the NFL. As fate would have it, the two icons would meet in a showdown for a championship that would eventually unite the leagues and change the course of football forever!

Owning exclusive rights to the most anticipated rookie card since Jim Brown’s debut in 1958, Topps returned to the philosophy that eliminated Bowman in the baseball card market; bigger is better! With Namath slated at card #122 in the 176-card collection, the 1965 Topps set was enlarged to “tall-boy” status, each card in the set measuring approximately 2 1/2 x 4 11/16 inches. The larger pasteboards were given bright and colorful backdrops of various colors within a bone white frame, creating a collection as hubristic as the rookie quarterback who would soon become its centerpiece. Certainly no “one-trick pony,” the collection features rookie cards of Hall of Famers Willie Brown and Fred Belitnikoff as well as Canton inductees Buoniconti, Blanda, Bell, Buchanan, Dawson, Maynard, and Alworth. But Topps’ first gridiron attempt at such a magniloquent collection wasn’t without its faults; poor centering due to the unorthodox card size became the norm and print overspray from the wildly strong background colors was widespread. It’s also accepted that 132 of the 176 cards in the set, including Namath’s card, are short-printed though one could also argue that the other 44 cards are actually double-prints of a limited quantity collection. These problems, combined with the difficulty of keeping such odd-sized cards in pristine condition for almost 50 years, result in one of the most difficult post-war assemblages to build in high-grade of any sport. 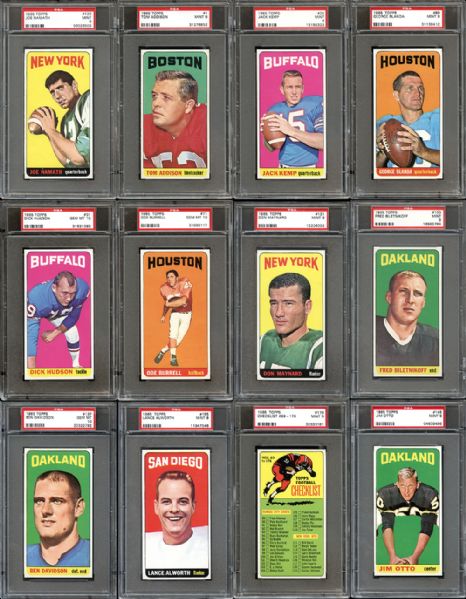 The featured set is the result of one of the most amazing achievements in sports card collecting. While ranked #1 Current and All-Time on the PSA Set Registry since 2008 with an astonishing 8.91 GPA, what’s even more impressive is that the highest possible set rating, requiring the very highest PSA grade for every card in the set, is at 8.937. Simply stated, there are only 7 cards in existence that can possibly improve this collection. Out of over 21,000 submissions to PSA, only 6 cards from the 1965 Topps set have ever graded PSA 10 GEM MINT and they’re all included in this set! The #2 ranked set sits nearly a half-point behind with a GPA of 8.42, not surprising since 37 of the cards (over 20% of the collection) are unique “one of one” specimens with none graded higher. This set is being presented two ways: in its entirety and each card offered individually, with the sale going to the higher total of the set versus the sum of the totals of the individual cards. Thus, interested parties have the opportunity to examine each card in the collection carefully, front and back, through our high resolution scans.