In the late 1990s, there was a pretty cool TV show called “Sliders” in which a group of scientists discovered a way to travel to parallel universes. Each time they would “slide” to an alternate Earth, they’d arrive at the same date and time but in a completely unknown environment as history had unfolded differently. Perhaps the “Earth” they landed on was dominated by the British, who had won the Revolutionary War, or visited a disease-riddled planet combating a worldwide plague, with antibiotics never having been invented. The moral of the show is that some decisions, no matter how benign they may seem at the time, can have repercussions that seriously change the course of history as we know it. We’ve all played this hypothetical “What If?” game at one time or another. For example, what if Babe Ruth, America’s greatest baseball hero, was remembered as just another great player, or even worse, a villain? This seemingly wild scenario is not as far-fetched as you might imagine, because it almost happened … more than once!

A theatrical agent, producer and director, Harry Frazee took a credit line in 1916 from owner Joseph Lannin to purchase the Red Sox for $500,000. By 1919, needing financing for his theatrical production “No, No, Nanette” as well as funds to pay off the note from Lannin, Frazee was forced to part with his most valuable asset, Babe Ruth. Offering an all-cash deal of $100,000, Babe Ruth was sold to the New York Yankees. 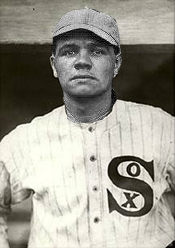 However, Frazee had another option; the Chicago White Sox offered star outfielder Joe Jackson and $60,000 cash for Ruth’s services; rejected in favor of the larger cash deal. Had the White Sox offer been successful, Joe Jackson would have patrolled the outfield in Boston and Babe Ruth would have played in Chicago. Well, for a short while anyway. With rumors of a conspiracy to fix the 1919 World Series continuing through the 1920 season, a grand jury was convened to investigate. While cleared of all legal charges, Jackson’s reign in the Boston outfield would have abruptly ended when Commissioner Landis issued a lifetime ban of Jackson and the other alleged co-conspirators. Ruth would have found himself toiling in relative obscurity, leader of an organization gutted by scandal that would finish no higher than 5th in the American League for the remainder of Ruth’s career. Instead of being the saving grace to restore baseball’s integrity, he would wear the cap of the team that destroyed it. There would be no “house that Ruth built” and no New York Yankees dynasty. “The Babe” likely would have been just another name among the greats, and the sport of baseball would have followed a very different path.

Married to the Mob

This scenario also takes place in Chicago, 1931. Prohibition was in full swing and the Windy City had descended into virtual lawlessness, with organized crime syndicates running gambling halls and overseeing the illegal distribution of alcohol to every restaurant and night club in the city. Law enforcement willingly, or sometimes unwillingly, accepting a fee to “look the other way” and crime bosses paid off politicians to grant “special favors.” Of the many crime families that ruled Chicago, none matched the nearly unlimited power of reputed crime boss Alphonse Capone. An avid baseball fan, Capone was often seen in the front row at White Sox and Cubs games. Meanwhile, 36-year old Babe Ruth was winding down an unprecedented career in New York. While past his prime, Ruth was still the premier offensive juggernaut in baseball, having already secured six American League pennants and three World Series titles for the New York Yankees.

Tired of watching the Chicago Cubs, a perennial powerhouse in years past, having gone Capone was indicted just months later and the plan of buying the Cubs never materialized. But if Capone was able to stay ahead of the Untouchables for another year or two, he may have realized his dream of being a “silent owner” and Babe Ruth would have ended his career in Chicago. But at that point, it likely would have been exposed that Hartnett was a front man for the Capone family, that Ruth and Hartnett conspired with Capone to secretly acquire the Cubs and the team would have been seized by the federal government as restitution for a conviction on charges of tax evasion.decades without a World Series title, Capone devised a plan where we would coerce Cubs owner Bill Wrigley into selling him the team and then buy Babe Ruth from the Yankees for $500,000, installing “The Bambino” as player/manager. According to Capone, he had already had discussions with Ruth on the idea and the Babe was on board, seeing the opportunity to realize his dream of becoming a manager that would never come about with the Yankees under owner Jack Ruppert. With the always vigilant Commissioner Landis calling the shots, there was no chance that such an unsavory character as “Scarface” would be approved to purchase the Cubs, so Capone set up an “under the table” deal in which Cubs star catcher Gabby Hartnett would be the legal owner on paper but Capone would provide the financing and pull the strings behind the scenes. According to Deirdre Marie Capone in her book,”Uncle Al Capone, The Untold Story From Inside His Family,’ when asked by his brother how he would persuade Wrigley to sell the Cubs, Al responded, “I’ll make him an offer he can’t refuse.”

Commissioner Landis, never one to show tolerance for illicit behavior, may have permanently banned Hartnett and Ruth for their role in the conspiracy, leaving “the Bambino” in the same company as Pete Rose and Joe Jackson; baseball immortals on the outside of Cooperstown, looking in!